What is Alzheimer’s disease and how common is it?

Based on December 2022 data from consented 23andMe customers

The ε4 allele has been seen in populations worldwide. It is most common in the African American population, followed by those of European descent, and is least common in individuals of South and East Asian descent.

There is more than one cause of Alzheimer’s disease. In some cases, a faulty gene or group of genetic variants is involved. Families with a strong genetic factor such as that seen in early-onset Alzheimer’s disease show a pattern of inheritance called autosomal dominant inheritance. This means the condition passes directly from parent to child, with each child of an affected parent having a 50% chance of inheriting the gene variant involved in early-onset Alzheimer’s and also being affected by the condition.

Some common genetic mutations, like the ε4 variant in the APOE gene, can lead to a higher susceptibility for late-onset Alzheimer’s. The genetic risk for developing late-onset Alzheimer’s disease is not as strong as it is for the early-onset form, and as the name suggests, symptoms tend to arise at a later age.

Non-genetic factors also play a role in the development of Alzheimer’s. These include age, exercise level, diet, and activities that promote health of the brain and heart. Alzheimer’s disease research focuses on improving the understanding of the interplay between genetic and non-genetic factors, how to reduce risk, and how to slow the progression of Alzheimer’s symptoms.

However,  ε4 and APOE are not the only determinants for risk. Some people with Alzheimer’s disease do not have an ε4 allele while some people with one or two copies do not develop disease. There are other genes and genetic mutations that also influence the risk for both late-onset and early-onset forms of Alzheimer’s and non-genetic factors at play.

People with Down syndrome are at a higher risk of developing dementia that is the same as or is similar to Alzheimer’s disease, with 50% of individuals showing signs of dementia by their 60s. This is possibly due to the location of the APP gene on chromosome 21. Researchers are still working to understand the genetic connection between these two conditions.

For all individuals, genetic testing is available to identify variants linked to the different types of Alzheimer’s disease. Additional genetic factors may be discovered in the future.

Does Alzheimer’s disease run in families?

Yes, Alzheimer’s disease can run in families, and this is especially seen in families with genetic variants linked to early-onset Alzheimer’s disease. Also, people with a parent or sibling with Alzheimer’s are more likely to develop the condition. It is difficult to estimate the risk for any one person or family, since there are various factors that make family members alike and different. If you share genetics but eat different diets and live different lifestyles, your risks will be different.

Early-onset Alzheimer’s disease is strongly influenced by genetics. Three genes, Amyloid precursor protein (APP), Presenilin 1 (PSEN1), and Presenilin 2 (PSEN2), are known to be factors in how the body produces and uses a protein fragment called beta-amyloid. It is not known exactly how genetic variants increase the risk of early-onset Alzheimer’s disease. However, beta-amyloid is known to impact the lifespan and function of brain cells.

Late-onset Alzheimer’s disease is influenced by genetics of the APOE gene, but genetics is only one factor in the risk. The APOE gene contains instructions for making a protein called apolipoprotein E. This protein helps control the levels of cholesterol and fats in the blood. It is not known exactly how the ε4 variant increases the risk of late-onset Alzheimer’s.

Having the ε4 variant in APOE does not mean that you have or will develop late-onset Alzheimer’s disease in your lifetime. How much your risk increases varies on a number of different factors such as your sex, age, and number of e4 variants. Researchers believe that a combination of genetic, environmental, and lifestyle factors all play a role.

Based on December 2022 data from consented 23andMe customers

As expected, a person’s e4 status, meaning how many e4 variants they carry, is the same regardless of genetic sex. This suggests factors beyond e4 are at play in the different rates of Alzheimer’s disease noted between males and females.

What other risk factors for Alzheimer’s disease are there?

Non-genetic factors are associated with higher or lower risk for Alzheimer’s. Many of these factors are interrelated — diet, exercise, and heart health, for instance. Here’s what we know about each one:

The risk of Alzheimer’s disease increases greatly as a person ages. This condition is most often diagnosed in people over the age of 65.

More females than males have late-onset Alzheimer’s disease. This may be partly due to the fact that women tend to live longer than men, but biological and lifestyle differences likely also play a role.

Family history also matters for Alzheimer’s disease. People who have a parent or sibling with Alzheimer’s are more likely to develop the condition. This could be due to shared genetics, but it could also reflect a shared home environment and lifestyle, or a combination.

Understanding the effects of diet on Alzheimer’s disease risk is an active area of research. Studies suggest a diet with plenty of green leafy vegetables, fruits, whole grains, and healthy fats such as those found in fish, nuts, and olive oil is associated with a reduced risk of developing Alzheimer’s disease.

Understanding the effects of exercise on Alzheimer’s risk is an active area of research. Evidence suggests that exercise benefits the brain and decreases the risk of developing Alzheimer’s disease.

Fewer years of education has been associated with a greater risk of developing Alzheimer’s disease later in life. The cause of this association is unclear. It could be that lower education levels reflect lower socioeconomic status, which may limit a person’s access to affordable health care and nutritious food.

Can genetic testing tell me if I am at risk for Alzheimer’s disease? 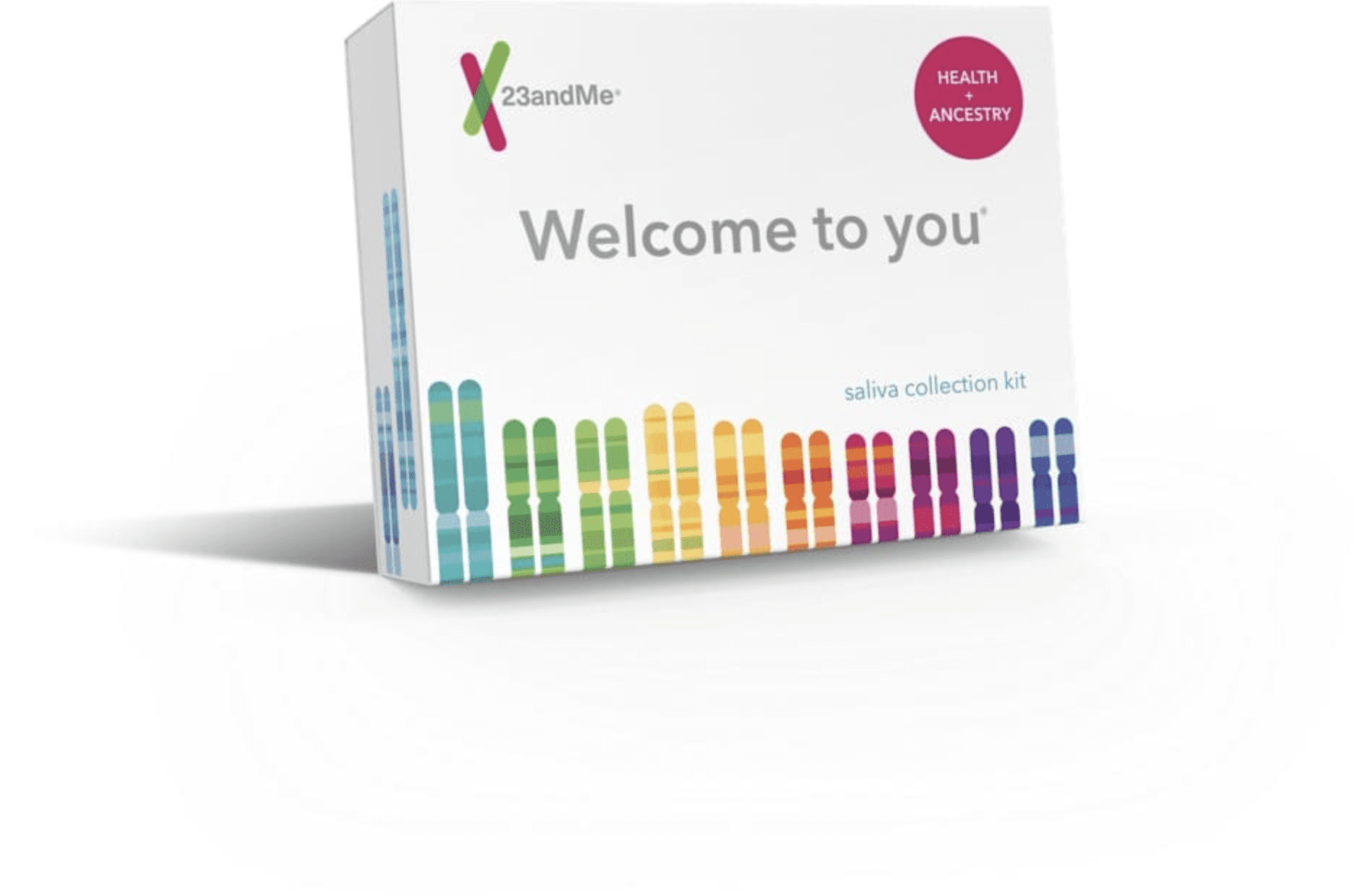 *The 23andMe PGS test uses qualitative genotyping to detect select clinically relevant variants in the genomic DNA of adults from saliva for the purpose of reporting and interpreting genetic health risks. It is not intended to diagnose any disease. Your ethnicity may affect the relevance of each report and how your genetic health risk results are interpreted. Each genetic health risk report describes if a person has variants associated with a higher risk of developing a disease, but does not describe a person’s overall risk of developing the disease. The test is not intended to tell you anything about your current state of health, or to be used to make medical decisions, including whether or not you should take a medication, how much of a medication you should take, or determine any treatment. The Late-Onset Alzheimer’s Disease genetic health risk report is indicated for reporting of the ε4 variant in the APOE gene and describes if a person has a variant associated with an increased risk of developing late-onset Alzheimer’s disease. The ε4 variant included in this report is found and has been studied in many ethnicities. Detailed risk estimates have been studied the most in people of European descent.

If you are concerned about symptoms, it’s important to talk to your doctor or healthcare professional. A genetic test cannot diagnose you with Alzheimer’s, it provides information on whether your risk is elevated or reduced compared to other people.

A doctor evaluating someone with early signs of Alzheimer’s disease may do cognitive tests and then refer them to a specialist for further testing. Some of those additional tests may include brain imaging and/or lab tests to look for signs of the disease, which can include structural changes in the brain or changes in levels of certain types of proteins.

As part of its Healthy Brain Initiative, the CDC emphasizes the importance of early detection, which gives people and their healthcare providers information, care, and support for their diagnosis.

How can I reduce my risk for developing Alzheimer’s disease?

There is currently no cure for Alzheimer’s disease, and because of this some people decide not to find out about their genetic risk for Alzheimer’s. Other people will decide to be tested because medication may be used to delay or ease symptoms, and there are also lifestyle changes that address Alzheimer’s risk factors.

Consult with a healthcare professional before making any major lifestyle changes.

Can knowing that I have the e4 genetic variant tell me anything else about my health?

There is currently no way to prevent Alzheimer’s disease. However, understanding more about the condition could help you or someone you know.

If you find out you have one or two copies of the e4 genetic variant in APOE, talk to your healthcare provider to determine what steps you can take to improve your brain and heart health and reduce your risk of developing Alzheimer’s disease. There is growing evidence that healthy behavior change may help reduce the risk for cognitive decline and possibly dementia. For example, an NIH study showed that lowering systolic blood pressure could help reduce mild cognitive impairment.

Hoogmartens J et al (2021). “Insight into the genetic etiology of Alzheimer’s disease: A comprehensive review of the role of rare variants.”  Alzheimers Dement. 13(1)